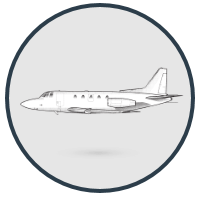 Brake Overhaul Kits for the Sabreliner 40